History and Styles of Chandeliers

How many times have we looked up at the ceiling when entering a church, a theatre or a sumptuous hall, and admired and marvelled at the glittering chandeliers that often adorn those rooms.

But when were the chandeliers we love so much created and how have they evolved over the centuries? What are the styles that have gradually followed and flanked each other?

Let’s find out together! 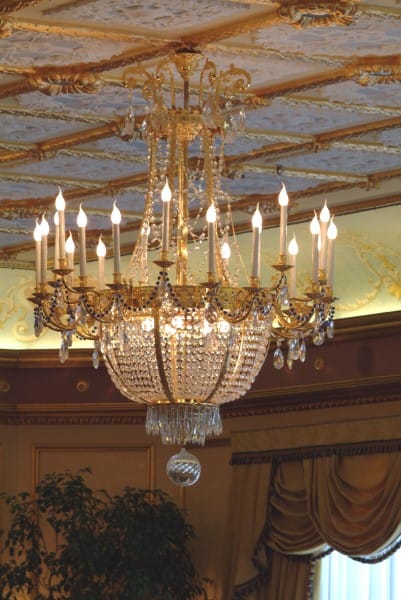 In my childhood, and still today, I always found that what is most beautiful in a theatre is the chandelier – a beautiful, crystalline, complicated, circular and symmetrical light object.

How did we arrive at the magnificence of the French chandeliers of the mid-19th century, with their Bohemian crystals and preciously decorated structures, which so enchanted the famous French poet Charles Baudelaire?

The chandelier originated in very ancient times: as early as the 5th century BC, in Italy, there is evidence of structures that were hung from simple oil lamps.

In the Middle Ages, chandeliers began to take on the characteristics we are all familiar with: the structures became circular, candles were inserted in special arms and chandeliers began to leave the sacred spaces where they had been relegated until then, to appear in private buildings.

However, it was in Italy, during the 16th century, that chandeliers began to shine thanks to the use of rock crystals, which were more reflective than glass, and therefore more brilliant and opulent.

Decorations became richer and richer, until the last important innovation in France in the 18th century: expensive rock crystal was replaced by Bohemian crystal. As chandeliers became less expensive, they received the final push to be used in the many contexts we know today.

In this type of chandelier, crystal chains, octagons or prisms are hung from a structure that resembles the shape of a basket or a hot-air balloon.

In addition to the more classic form without arms and shades, there is also a version with them.

Italian chandeliers are characterised by a much more pronounced decorative spirit, with intricate workmanship of the structure and a predominance of crystals and coloured stones.

The cradle of chandelier making is the small island of Murano, near Venice, where for centuries master glassmakers have been creating small, finely crafted and most often coloured glass elements, thanks to which Italian chandeliers have become synonymous with splendour and luminescence.

Our Clarice chandelier is characterised by pink prisms in Bohemian crystal and bunches and cherries in precious Murano glass.

In the middle of the 18th century a chandelier was created in Austria in honour of Empress Maria Theresa, which gave rise to a whole genre.

Maria Theresa chandeliers are characterised by a gilded metal frame, with protruding arms and decorated with Bohemian crystal elements.

The Kerima chandelier, a splendid example of this type of chandelier, features a brass and cast brass frame, bevelled Bohemian crystal gems and a patinated 24kt gold finish.

Empire chandeliers have their roots in the ancient world, but use elements such as frets and garlands of fine Bohemian crystal in a modern way.

These chandeliers can elegantly decorate large spaces, even if only thanks to the natural light reflected by the crystals, providing an exciting play of light.

The photo shows our Sophie chandelier, with a brass and cast brass structure, octagons and gems in ground crystal and patinated 24kt gold finish.

A distinctive feature of French-style chandeliers is the rich decoration: chains, drops and prisms of Bohemian crystal embellish the structure of the chandelier, giving elegance to any room in which they are inserted.

Today, chandeliers have lost none of the fascination they have exerted on all of us for centuries. Thanks to the use of new materials and new technologies, they are becoming increasingly popular, even in smaller rooms, revolutionising interior design and the concept of lighting.

Often used to create colour contrasts, for example by opting for strong colours such as red or pink, or by being placed in contexts where their use had never been suggested before, such as above a kitchen counter, chandeliers remain an element of timeless charm and still able to arouse wonder and amazement in the eyes of those who admire them.

This website uses cookies to improve your experience. We'll assume you're ok with this, but you can opt-out if you wish.
SettingsAccept
Manage consent

This website uses cookies to improve your experience while you navigate through the website. Out of these, the cookies that are categorized as necessary are stored on your browser as they are essential for the working of basic functionalities of the website. We also use third-party cookies that help us analyze and understand how you use this website. These cookies will be stored in your browser only with your consent. You also have the option to opt-out of these cookies. But opting out of some of these cookies may affect your browsing experience.
Functional
Functional cookies help to perform certain functionalities like sharing the content of the website on social media platforms, collect feedbacks, and other third-party features.
Performance
Performance cookies are used to understand and analyze the key performance indexes of the website which helps in delivering a better user experience for the visitors.
Analytics
Analytical cookies are used to understand how visitors interact with the website. These cookies help provide information on metrics the number of visitors, bounce rate, traffic source, etc.
Advertising
Advertisement cookies are used to provide visitors with relevant ads and marketing campaigns. These cookies track visitors across websites and collect information to provide customized ads.
Others
Other uncategorized cookies are those that are being analyzed and have not been classified into a category as yet.
Necessary
Necessary cookies are absolutely essential for the website to function properly. These cookies ensure basic functionalities and security features of the website, anonymously.
SAVE & ACCEPT