What Parts Does a Chandelier Consist Of?

How many times has it happened to us, upon entering a sacred building, a theatre or a sumptuous hall, to raise our eyes to the ceiling and to stand in admiration and amazement at the glittering chandeliers that often adorn those rooms!

We are captivated by the splendour, shine and magnificence before us, but we often fail to dwell on the many details that make up the splendour of the whole.

Today we will look at what parts a chandelier is composed of, what elements make it up and what the functions of each element are. 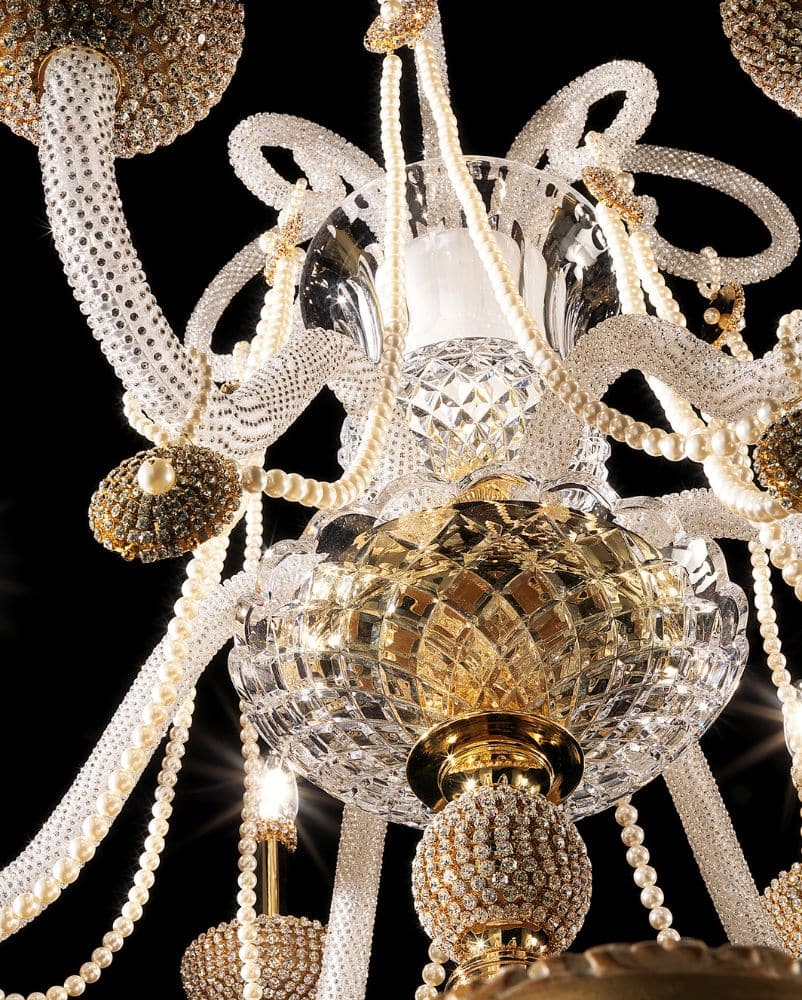 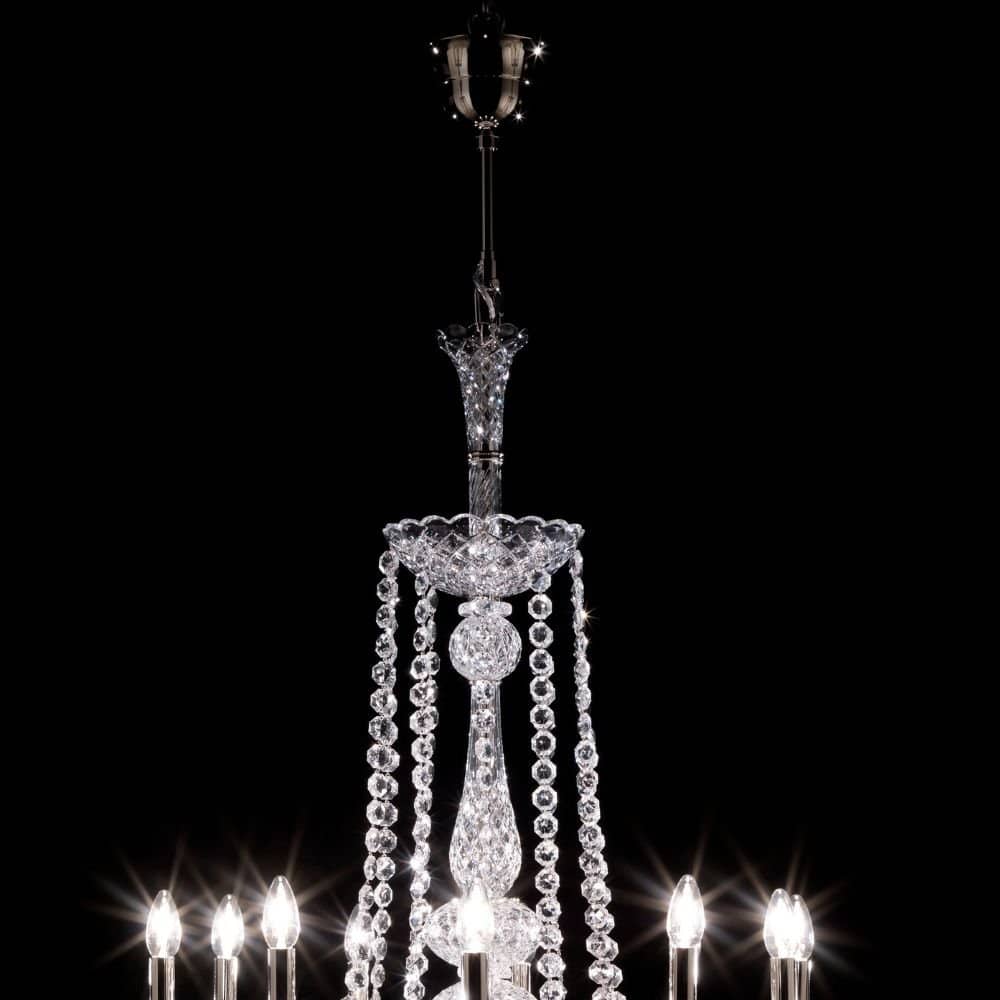 The top part of a chandelier is of fundamental importance, as it connects the chandelier from the ceiling attachment to the main part of the structure, from which arms and other elements of the lamp can then be led out.

The function of the ceiling rose is that. of a cable-guide box, i.e. a canopy that conceals all electrical connections. In addition to the mere utility of the element, there is also an aesthetic function, thanks to which even an element that at first glance seems more useful than anything else can take on decorative importance.

From the rosette most often starts a chain, or in any case a connecting element, which joins the rosette to the subsequent elements: crown, ball and mace.

These three elements, most often found in glass chandeliers and which you can see in the adjacent photo, are elements with both an aesthetic function (thanks to the many decorations) and useful as a further connection to the rest of the lamp.

The base of the chandelier supports the entire structure and is the part from which arms and further elements of a lamp can be started.

Most often made of metal, it is also one of the most important aesthetic elements of a chandelier: the structure itself can be finely carved or decorated, while precious crystals, prisms and other decorations can be hung from the base itself.

As already mentioned among the most important structural elements are the arms, i.e. the base of the lighting body, which are essential for holding lights or candles in place.

The arms may also be finely decorated with carvings or elegant designs, so as to go beyond their simple function as a support for the lighting.

The arms often end with cups, elements to which candles or other lighting sources are attached.

The decorative part of chandeliers is the one that most generates the admiration and amazement we mentioned at the beginning of this article.

The decorations on a chandelier can be so many, and to create each one requires unparalleled craftsmanship.

Take a look in the photo opposite at the leaves, high and low, that we have made: the small veins, the softness, the impression of looking at something real!

Among the main materials for decorating a chandelier are crystal and glass. Numerous decorative elements can be made with these materials, such as flowers, bunches of grapes and shiny prisms.

This website uses cookies to improve your experience. We'll assume you're ok with this, but you can opt-out if you wish.
SettingsAccept
Manage consent

This website uses cookies to improve your experience while you navigate through the website. Out of these, the cookies that are categorized as necessary are stored on your browser as they are essential for the working of basic functionalities of the website. We also use third-party cookies that help us analyze and understand how you use this website. These cookies will be stored in your browser only with your consent. You also have the option to opt-out of these cookies. But opting out of some of these cookies may affect your browsing experience.
Functional
Functional cookies help to perform certain functionalities like sharing the content of the website on social media platforms, collect feedbacks, and other third-party features.
Performance
Performance cookies are used to understand and analyze the key performance indexes of the website which helps in delivering a better user experience for the visitors.
Analytics
Analytical cookies are used to understand how visitors interact with the website. These cookies help provide information on metrics the number of visitors, bounce rate, traffic source, etc.
Advertising
Advertisement cookies are used to provide visitors with relevant ads and marketing campaigns. These cookies track visitors across websites and collect information to provide customized ads.
Others
Other uncategorized cookies are those that are being analyzed and have not been classified into a category as yet.
Necessary
Necessary cookies are absolutely essential for the website to function properly. These cookies ensure basic functionalities and security features of the website, anonymously.
SAVE & ACCEPT